I have always been a huge fan of robots. I adored ‘Robbie’ in Lost in Space – although I preferred him in ‘Forbidden Planet’.

Gort was great too!

He was the eight-foot robot companion of the alien Klaatu in 1958’s classic ‘The Day the Earth Stood Still’. Unfortunately he lacked facial features, but was still capable of more expression than Keanu Reeve who played Klaatu in the remake. And Gort could open his visor and shoot out a death-beam, something else Keanu Reeve can’t do – yet.

Then there is Marvin – ah, Marvin! ‘Brain the size of a planet’, but he’s an android isn’t he?

And of course everybody loves Asimo, the real-life walking and running robot from Honda, who unfortunately stands a little like he might have had a minor oil leak in his metal shorts. Apparently it is a complete coincidence that his name sounds like Asimov, the surname of the SF writer who proposed the three laws of robotics. These are (and surely it’s not just us cool guys who know this?) the following:

I think we can safely say that these laws should apply to androids too – especially Marvin.

Anyway – robots everywhere: happy birthday! You are 100 years old this year! Many congratulations!

It was in 1920 that Czech Karel Čapek published R.U.R., which stands for Rossumovi Univerzální Roboti (Rossum’s Universal Robots). The play wasn’t actually performed until 1921, but it was from his play that the word ‘robot’ soon entered human language. It is now used to define any a machine that is programmed to move and perform certain tasks automatically. 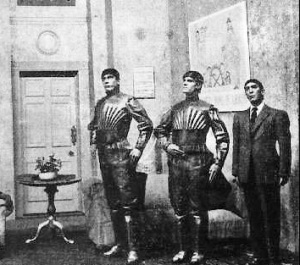 However it is clear from this early photograph from a production of R.U.R. that they were intended to be human-like. In that, they were actually very much like androids – a term that appears in US patents as early as 1863 and, as “Androides” in Ephraim Chambers’ Cyclopaedia of 1728.

Since then robots, and androids – and cyborgs too (a name first coined in 1960 by Manfred Clynes and Nathan S. Kline) – have given us plenty to think about when it comes to being human.

Even the Daleks have had their moments!

So, happy 100th robots everywhere! Long may you rule. END_OF_DOCUMENT_TOKEN_TO_BE_REPLACED