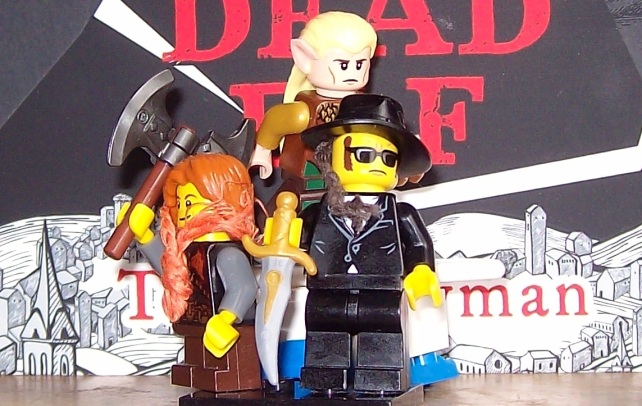 Elves, you just have to love them, don’t you? I mean, with their natural in-born nobility, un-specified magical powers, tall blond looks, high cheekbones and pointy ears, what’s not to like? No wonder that the most unfairly maligned of youth cults, the peace-loving hippies, was so taken by them. Unless, of course, your elves happen to be small enslaved domestic helpers with no dress sense and a habit of talking about themselves in the third person: “Blobby wear sack now”. Or perhaps you’re still hooked on the idea that Santa Claus keeps legions of relatively magic-free green and red clad elves to help assemble Smartphones and games machines in the frozen wastes somewhere north of the place they filmed ‘The Killing’.

Then again, if you ever had the misfortune to share 89 minutes (feels like longer) with TV’s Dan “Grizzly Adams” Haggerty you might think ‘Elves’ (1989) are all about a neo-Nazi plot to create half-human/half-elf hybrids that were Hitler’s original idea for a master race. An idea inexplicably left out of most histories of World War II. Not forgetting the Dark Elves who gave Marvel’s Thor such a bad time in ‘Thor: The Dark World’ (2013) with their leader Malekith the Accursed who managed to look almost nothing like the actor Christopher Eccleston. Elves with high technology, there’s a new thing (or is it?).

It doesn’t really matter though, because they’re all elves now (OK, with the exception of the half-human master race) and elves have always been the trickiest of supernatural creatures to pin down. Even the Christmas elves are welcome to the fold and they seem to have their origins in illustrations that appeared in the American “Godey’s Lady’s Book”, a successful monthly magazine published in Philadelphia in the 1860s. Although the diminutive, gift-giving, white bearded ‘tomte’ from Sweden seem to fit that Xmas elf bill pretty closely too, giving rise to the possibility that Santa himself may be an elf.

The Old English ælf also had a ‘difficult’ relationship with people and any interaction could be to the person’s advantage –gifts yes please!-or severe disadvantage (where’s me cow). Partly depending on whether you were mixing it with the light elves or dark elves of course (very little good news with the dark elves actually). The dark elves weren’t a Marvel invention, but part of the Norse elf origin story. Called the Dökkálfar they tended towards a subterranean life style while the light elves, the Ljósálfar, lived in a rather nice place called Álfheimr (Old Norse ‘Elf Home’). The light elves took out the first patent on the blond, high cheekbone routine, being ‘fairer than the sun to look at’. This idea carried over into Scottish myths and the ‘Seelie’ and ‘Unseelie’ courts. The ‘Seelie’ court could do you a power of good, although annoying them, say by spilling slops into their houses, could also lead to the appropriate chastisement. The Unseelie court, which also included sluagh, redcaps, baobhan sith, shellycoats and nucklelavee amongst their number, just had it in for people.

Here though we reach contentious ground: when is an elf an elf and when is an elf a fairy? In England the light elves tended to be very similar to the fairies of Shakespearean fame – Titania’s hangers on. These would often be called elves as when Titania mentions ‘my small elves coats’. In Scotland elves were more likely to be human sized and lived in Elfame and that has certainly influenced one strong fantasy strand we know about.

In Scandinavia, life became more complicated when elves became mixed up with the huldre folk. These were originally more like forest spirits, usually female and associated with agriculture and women’s crafts. Although rather helpful, they’d take care of charcoal burner fires for example, they were also liable to kill your cattle and steal your children. And although the huldre women were very beautiful they did have cow’s tails (best not to mention it though, they got touchy).

In Iceland their elves, Huldufólk, have never gone away. Very much a part of life in fact and earlier this year plans to build a new road ran into trouble when campaigners warned that the road works would disturb elves living nearby. Construction work had to be halted, of course, while a solution was found.

So it seems that, love them or hate them, elves are not going to go away especially in our popular culture. They may pop up in different guises and sizes but the need for some ‘magical’ other to share our lives with seems very strong. Elves are here to stay – much to the annoyance of many dwarfs that I could mention.