There you go – you won’t get many shorter bogs than that.

OK, try this one then if you insist: it’s not for their strengths, it’s for their flaws, their weaknesses, and their quirks. We love ‘em for the things that make them human, even if they’re not.

Here’s one of my favourites, who now graces my study’s wall: Fred Flintstone. 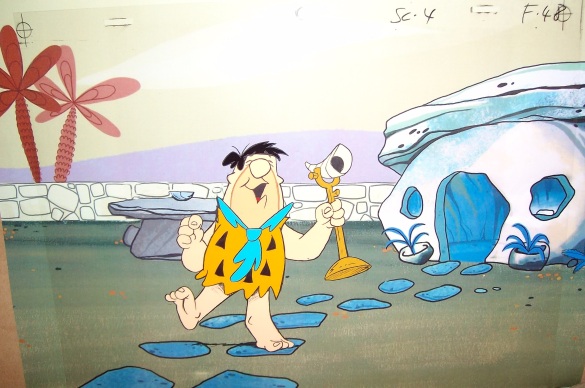 Fred is loud and loses his temper far too often. He plots to improve his lot, usually ineffectually, but he cares. He cares about his family, his friends. I like to think he’d care about prehistoric climate change too (dino farts!) He’s very much alive, and of course expresses this with his trademark, joyful: ‘Yabba Dabba Doo!’

Here’s another similar character: Homer Simpson. Despite all his many, many faults, Homer loves his family too – well his wide and children. He’s on a different wall: ‘Yabba Dabba D’oh!’

And then there’s Daffy duck (hanging next to Fred now). Daffy doesn’t seem to have much about him, apart from faults. But there is something supremely human about him and his ambitions – and shortcomings. ‘Yabba Dabba Fail.’

So, looking for a great character, or want to improve one you’ve got? Bring on the failures and their faults, we love ‘em. As the Stranglers rightly said: ‘No More Heroes Anymore’.